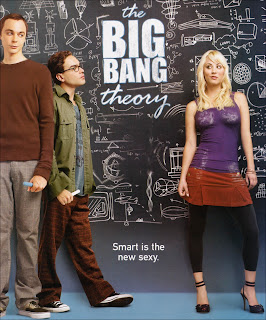 I watched most of the first season of "The Big Bang Theory."  The reason was simple.  It was fresh and funny.

Then, it took a turn I didn't like.  The producers got Penny and Leonard together way too fast.  I enjoyed the dynamic of Leonard pining after Penny, the pretty girl he could never have.  His social awkwardness was cute and charming, a lot like the Niles/Daphne thing "Frasier" had going for several years.  Leonard's heartache gave his character some depth, and it took the show to a level above sitcom slapstick.  It got you to care.

Penny and Leonard eventually broke up.  It was too late for me.

Fast forward a few years.  "The Big Bang Theory" is now out in syndication, and I stumbled across some episodes from the most recent seasons.  Guess what?  It's still very funny.  Most of that is on the shoulders of multiple Emmy award winning Jim Parsons, who plays Sheldon.  Parsons could turn Sheldon into one of the most memorable TV characters of all time, but it's still early.

I still miss the way the Leonard/Penny relationship worked, or didn't work, very early in the series' run, but the producers and writers have managed to keep the show fresh and funny.  You can't say that about many series on TV these days.

Yes, I've put way too much thought in to this.

One other TV note today...  I caught a few episodes of another CBS sitcom, "2 Broke Girls."  It's off to a good start.  There's tremendous potential here, and I hope the writers can keep it going.  Any series with a horse called "Chestnut" has to be good.﻿
AT 12:00 AM