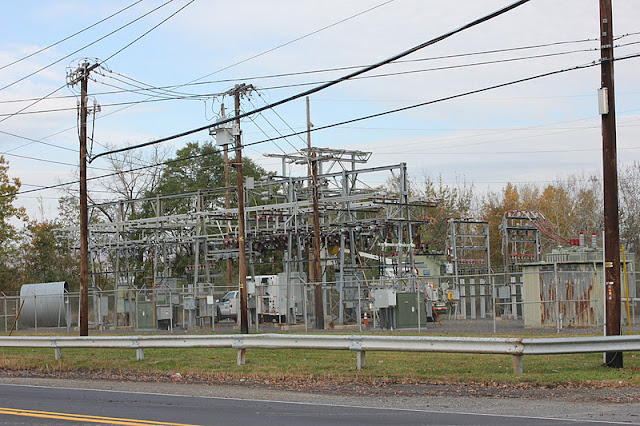 I preface today's entry by saying my problems paled in comparison, by far, to those who had issues during Hurricane Irene and Tropical Storm Lee.

It was a little before 5 AM yesterday, and I was in the midst of my usual morning routine-- checking Tweets and e-mails, personal and professional, and going through the morning papers.  Then, it happened.  The lights went out.  I looked out the window, and I knew it was bad.  This wasn't a block or neighborhood thing.  There was darkness as far as the eye could see, or couldn't see.

In the old days, I'd flick on a battery powered radio for the latest.  I have several of those.  Unfortunately, radio news is all but extinct in the Scranton/Wilkes-Barre area.  If it's not on line, in the paper, or on TV first, you don't hear it.

This is 2011, so I powered up my netbook and triggered the air card.  I e-mailed the office, and learned what had happened.  There was a fire in the PPL Marshwood Road, Throop substation, pictured above.  About 5,000 homes and businesses were in the dark.

Newswatch 16 streams its newscasts, so I got the latest from Tom, Mindi, and Joe.  After about an hour, I decided to save battery power, and turned off the netbook.  The video from the scene looked serious, and I didn't know how long I'd be without electricity.

Not content to sit around and do nothing, I grabbed the beagle and went for a walk in the pre dawn darkness.  Even though I had my giant MagLite, it was still really, really dark outside.  There was only a sliver of moon, and it was shrouded by clouds.  Quality time with the beagle killed about 45 minutes.

One I got home, it was the radio for entertainment, not information.  The station with my favorite music plays the same taped newscast hour after hour, and there was no mention of the power outage.  I read the newspaper by flashlight, and those little LED lanterns I got cheap at Walmart really came in handy.

After about three hours, the lights came back on.  After re-setting some clocks and answering machines, life returned to normal.

To those of you who spent days without electricity this summer, I don't know how you did it.
AT 12:00 AM