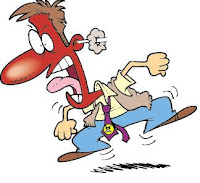 This one has been sticking in my craw for a while, and it's time I vented.

I'm usually awake at 2 AM, even on my days off.  I frequently tune in a radio station that features a top of the hour network newscast.  Some people grab a smoke or something to drink first thing in the morning.  I grab information.

Anyway, after the network newscast airs, this radio station plays two commercials.  No big deal, right?  Well, this station plays these two commercials AT THE SAME TIME!  It's not just once in a while.  It happens every morning!  It's clear workers aren't listening to their own station, or they just don't care.  Apparently, the advertisers aren't listening, either.  If a radio station wasted my money that way, I'd be screaming bloody murder.

Then, there is the radio station that plays a network newscast at about ten minutes before the hour, followed (only in the morning) by a minute of taped local headlines-- most taken from the newspapers and TV stations.

Here's the way this outfit is run-- the local taped segment frequently cuts off the end of the network newscast, and the local segment ends in the middle of a song from the satellite delivered format.

Isn't anyone listening?  Does anyone care?

I'm a realist.  Radio isn't what it used to be.  The stations I referred to above are computer controlled.  Computers have problems from time to time.  We've experienced some of that where I work, but there's a difference.   We fix our problems.  We don't let them continue day, after day, after day.

It's already been established that I got my start in radio, and it is my first love.  That's why I get so angry when I hear careless mistakes.