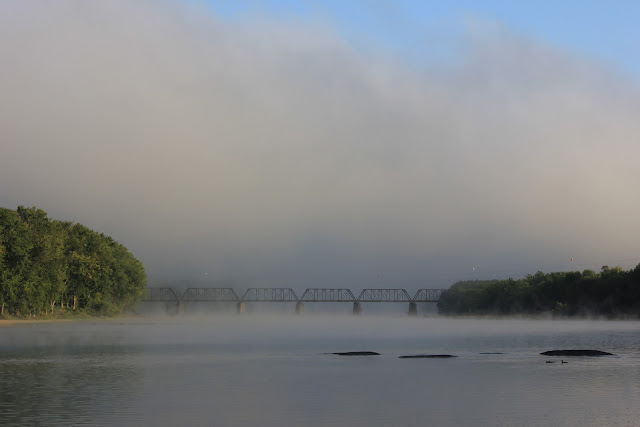 I've been taking a lot of photos lately, and there were several possibilities for September's blog header.

In year's past, I've tried to do something education related in September because it's the big back-to-school month.  However, it's the first anniversary of the Tropical Storm Lee flood.  That drew me to the Susquehanna River at Pittston Thursday morning.

Regular blog readers will recognize that I've been here before.  It's a great place to take pictures, and a fog shrouded railroad bridge wound up being my favorite photo of the year, a few years ago.

This shot was taken on the Pittston side, looking upstream, with the Fort Jenkins bridge at my back.

I saw river fog in the forecast, so I tried to replicate the shot of a few years ago, with a different camera, and a better lens.  Unfortunately, the fog Thursday morning was not as intense as it was a few years ago.  I'll keep looking, and keep trying.

I was on vacation for last year's flood, but I was watching the excellent coverage of my colleagues while I was away.  The images are burned in to my head, and I was lucky.  I'm not in the flood plain.

There are still some places that haven't recovered from Lee, and it will be a while before they do.
AT 12:00 AM