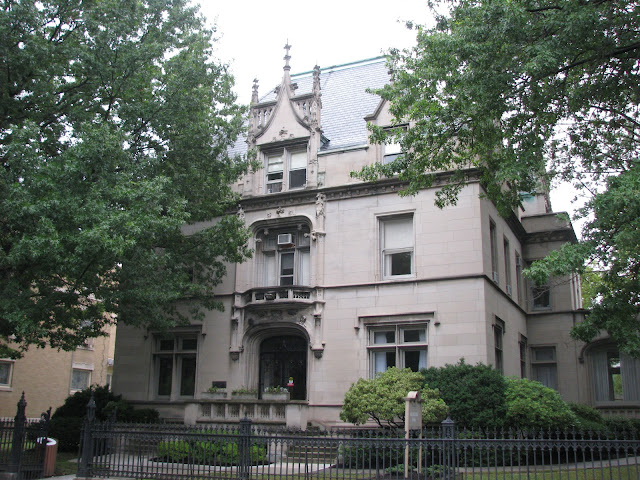 One of the neat things about Wilkes-Barre is the number of cool mansions downtown.  You can see some great ones on an informal walking tour.

Unlike Scranton, where the big houses are in the hill section and Green Ridge, Wilkes-Barre's mansions are just a couple blocks off Public Square.

Above is Wekesser Hall, the property of Wilkes University, and below is the entry from the Wilkes web site.

Some call it "The Castle."
Those lucky enough to work in Weckesser Hall are surrounded by the opulence of one of the largest former mansions in our historic neighborhood.

The first floor of the limestone building features two boardrooms and a kitchen, in addition to a reception area and other offices.

The second and third floors -- former bedroom suites and an opulent Oriental-style ballroom -- are now home to administrative offices.

The attic and basement are used for storage and other purposes. One room of the basement was used as a billiard room in the original house.
originally had... a third-floor ballroom
still has... a working elevator & a surround shower
one chandelier... hangs from a 24-foot chain
rain gutters... inside the building

If you were at Wilkes after 1956...
Weckesser might have been your "Castle" for a semester or two. The building was acquired by Wilkes in 1956, after the passing of Mrs. Anna Weckesser. It was used as a female dorm from 1964 to 1967.

The Weckesser home was built between 1914 and 1916 as a residence for Frederick J. Weckesser, who moved to the Wilkes-Barre area at the turn of the nineteenth century. He became associated with F.M. Kirby, who lived at 202 South River Street (our current Kirby Hall). When Kirby's business merged with the Woolworth Company, Weckesser became a district manager, and at the time of his death in 1953, was the director of the F.W. Woolworth Company.

This success in the business world provided Weckesser with the means to build his fabulous Beaux-Arts style home, which was popular in the United States prior to World War I. It is one of the few examples of this type of achitecture left in Wilkes-Barre. Also included in the property is a large garage, now known as theWeckesser Annex.
AT 12:00 AM