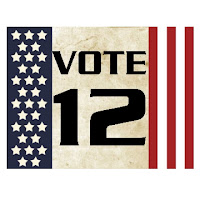 Obama and Romney are on the ballot for the November 6th election, but I've been reading where many Americans will be making another choice, and that is to stay home.

It makes me ill.

As I've noted here before, I've never missed voting in an election in which I've been eligible to cast a ballot.

Voter apathy has always been an issue.  Some feel this presidential election could set a record.  Barack Obama isn't generating that excitement he had four years ago.  A lot of people haven't warmed to Mitt Romney.  Apathy isn't limited to one party.  Negative ads are always a turn off.  Factor in a lack of productivity in congress, and you can understand why people are frustrated.  They don't know where to turn.  They feel no one represents their views and interests, so they stay home.

Refusing to be part of the process doesn't solve anything.

The last day to register to vote is October 9.  Use your privilege.  Please.