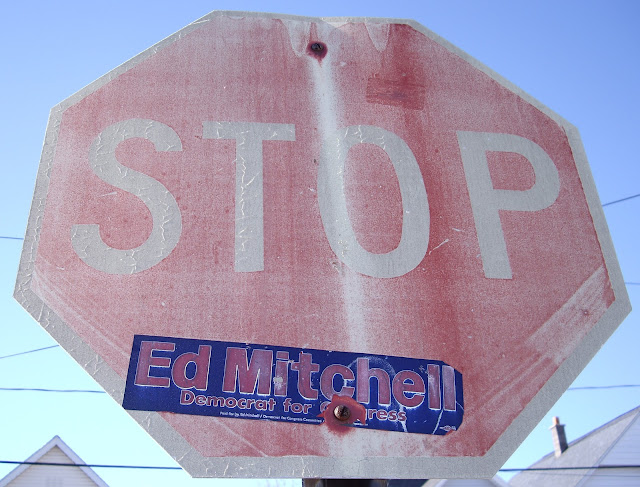 The photo in and of itself is not a thing of beauty, but the fact that it's still around makes it worthy of mention.

I took this picture back in the spring, in the Tripp Park section of Scranton.  The sticker is from Ed Mitchell's 1976 congressional campaign.  It stayed stuck for more than 36 years, and I hope it's still there today.

Tomorrow...  days in the dark.

I had just lost my job as morning news producer at channel 22 in May of 1998.  It was merging with channel 28, and my services were no longer required.  I was offered a job in Charleston, WV and I tentatively accepted it.  I asked the news director in West Virginia for a little more time to make sure.  He said "Take two weeks."  In that two weeks, I called Paul Stueber at WNEP.  I thought it was a long shot, but you miss 100 per cent of the shots you never take.  He agreed to a meeting.  We talked.  I showed him my tape of saved stories, and I thought it went well.

I later learned through a third party that there were forces working against me at WNEP.  I fully expected and understood that.  I was the competition, first on radio, then TV for more than 15 years.  You're going to step on some toes.  Fortunately, a former general manager and a former news director both lobbied Stueber on my behalf.  He had the good sense to follow his gut and not listen to the nay sayers, and I will forever be grateful.

There was a bit of a compromise.  I didn't get the Action 16 job I wanted.  I was offered the job as producer of the weekend morning broadcasts.  The money wasn't the greatest, but I took it, and that was 14.5 years ago.

Not quite a year in to my run, Paul called me in to the office.  He didn't like the chemistry of the weekend morning team, so he asked me to become co-anchor.  I was a little concerned.  I had been off the air for a few years. Luckily, the rust came off after a few weeks, and it went well.

I will always remember a day when I was producing the 6 PM weekday news.  I was struggling with a script and I found it impossible to make interesting.  I asked Paul for help.  In just a few seconds behind the keyboard, it was a polished masterpiece.  He is on the very short list of "great news minds" I've worked with.

I really should back up several years.  I was working at WARM in the early 80's, and I sent Paul a letter, asking for a job.  He sent back a reply, ripping me and ripping the station.  It dripped with nastiness.  I kept the letter, and several months after I started at WNEP, we talked about it, and Paul asked to see it.  He looked at it and apologized.  When he offered to give it back, I declined, saying it was all in the past.  I assume it went in the trash.

It wasn't all sunshine.  Paul could be quick tempered and difficult to be around.  There were health problems that kept him out of the office for extended periods.