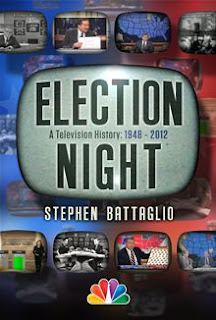 It seems a fitting topic on Independence Day-- a book review concerning a celebration of democracy.

One of the neat things about having an e-reader is once Barnes & Noble, or in my case, Amazon, learns what you like, there are suggestions aplenty.

I just finished Stephen Battaglio's "Election Night."  It documents how television covered presidential elections, going back to the mediums infancy in 1948.  It's a breezy read, filled with pictures, but there's enough meat to keep a political wonk and news junkie happy.

The book is broken down in to four year cycles, featuring the gimmick of the year-- from computers, to graphics, to exit polling and voter analysis, and the internet effect.

As you can guess from the peacock on the cover, the book is written from the NBC perspective.  I've always been a CBS guy.  Growing up, it was the gold standard.  Through You Tube, I learned NBC did a lot of good stuff over the years.  John Chancellor was vastly under rated.  David Brinkley was awesome.

Tom Brokaw and Tim Russert lost me.  Brokaw's "Nightly News" was the first to go fluffy.  Russert enjoyed bringing up something irrelevant in your past, only to say "gotcha" on "Meet the Press."  He worked for liberal politicians for years, and I thought it showed.  Brian Williams seems excessively wordy.

I love election nights-- working and watching.  It's the Super Bowl for those of us in TV news.  It's a bit of history.

Those inside and outside the business should get something out of "Election Night."
AT 12:00 AM