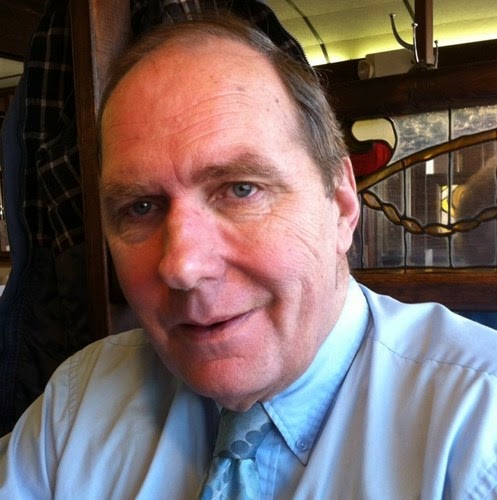 I was going to sister this entry beside one of the photo Top Ten's, but then I thought, no, Bob Reynolds deserves an entry of his own.

Bob retired at the end of 2014, and I don't think I've ever met anyone like him.  His passion for the job never waned.  Bob did twice the work of those half his age.  He covered his beat and came back with two stories, at least two stories, every day.

Bob knew how to find a story.  He listened to everyone who called the office.  He asked good, tough, and fair questions.  He knew his beat.

I hung the title "King of All Media" on Bob several years ago.  It was right after commissioner Frank Crossin killed his already "on life support" political career by shoving Bob over a chair at the close of a commissioners' meeting.  The commissioner had a problem talking about the investigation into his alleged drunk driving, and allegations of special treatment after he slammed his car into a light post in a toy store parking lot.  After the shove, Bob was on the other tv stations, plus newspapers and radio.  Hence, he became the King of All Media.  I called him that all the time.  He didn't mind the joke.

There's another Bob story I should tell here.  It's more evidence that there are stories everywhere you look.  It was a Thanksgiving afternoon in the late 90's.  Bob and a photographer were working in Wilkes-Barre.  I was manning the assignment desk.  We heard a kitchen grease fire in Wilkes-barre come over the scanner.  Remember, this was a kitchen fire on Thanksgiving.  Bob called me on the desk, asking permission to check it out.  I responded that it was only a kitchen fire and it was knocked down fast.  Bob's response "Hey, that's somebody's dinner."  I'm sure someone's incinerated turkey could have been news, but I passed.

Bob was never one for showing a lot of emotion and humor on the air, but he has it.  I appreciated it.  There were many days I needed it.

I was tickled to be asked to attend a surprise birthday party for Bob a couple of years ago.  It fell on one of my weekends off, so I gladly drove to White Haven for the celebration.  The fact the invitation said "no gifts, please" had nothing to do with it.