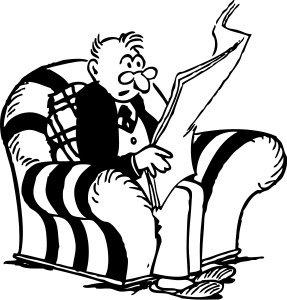 Marywood University has decided to stop printing its student newspaper, the Wood Word.  It's a move that distresses me greatly, and let me tell you why.

Print is struggling.  Greatly.  It's not dead.  A Wood Word editorial called print the past.

There are thousands of journalists around the world busting their humps to make print relevant.  To them, it's not the past, but it is changing.

As far as I'm concerned, if something needs help, you fix it.  You don't pull the plug.  Keep breaking news on the web site.  Use print for long form.  Photography.  Essays.  Things best served away from daily deadlines.

Believe it or not, print is a different writing style from web.  What I write here is different from what I put on WNEP.com and the stories I write for our newscasts.  I'm sorry you have decided to take a "one size fits all" approach.

There are some good things going on at Marywood. In my day, print and broadcast never mingled.  I'm glad someone there has figured out we're in the same business.  The Wood Word has aggressively covered social issues on campus and Marywood's apparent financial problems.  Kudos, again.

It's too late now, but you should have kept the print.  You're not saving that much money.  You're missing a lot of the medium's potential.

This is not a jab at Marywood in particular, but I take you back to what might have been the greatest four minutes in the history of television.  It was character Will McAvoy's rant in the first minutes, of the first broadcast of HBO's "The Newsroom."  McAvoy said America was great in the past because we "were informed by great men, men who were revered."

I grew up on Cronkite and his stable of outstanding CBS correspondents, Chancellor, Brinkley, Smith...  I marveled at how Woodward and Bernstein brought down a president, and the Washington Post (that's a newspaper) had the onions to back them.  What do you have in the internet age?  Matt Drudge?  I consider myself to be very lucky.

One more print item before I hit the "publish" button.  Stan Lukowski passed away this week.  He was Throop mayor for many years.  Before that, he was spokesman for Tobyhanna Army Depot.  Lukowski also wrote a Scrantonian column, focusing on Throop, Dickson City, and Olyphant.  I received a few mentions over the years.  It was always a kick, and a source of pride for the family.  Stan will be fondly remembered.  My sympathy to his family, friends, and fans.
AT 12:00 AM