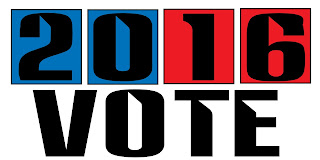 We've had a couple primaries and a couple caucuses.  This year's presidential political picture is becoming clearer-- a bit.

Hillary Clinton has yet to deliver a knock out punch to Bernie Sanders.  There is a string of southern primaries coming up, and I suspect that punch is on the way.

Sanders has a strong, loyal following, but when Democrats ask themselves who is more electable, they will likely land in Hillary's camp.

There are still some who believe Clinton's biggest opponent is a potential indictment rather than Bernie Sanders, and that may very well be true.  However, at this point, Mrs. Clinton is in the driver's seat.

On the Republican side, here is something no one is talking about yet-- the electoral college.  The Democrats start with California and New York in their pockets.  84 electoral votes total.  For a Republican to become president, he has to hope for a solid south (including Florida) and Rockies.  Plus, he has to pick off more than a few Great Lakes and mid Atlantic states.  That's tough.  Can you picture Ted Cruz doing it?  I don't know.  Trump?  Maybe.  Rubio?  Possible.

Jeb Bush pulled out of the race Saturday night.  It was a bad campaign.  He was attacked.  The response was rather feeble.  Jeb is a smart guy, who probably would have been a better than average president.  It seems like he let Trump define him, and recovering was a lost cause.

A USA Today writer says Bush bombed because this is the year of the anti establishment candidate.  Okay.  That explains Trump.  Possibly Rubio and Cruz.  They haven't been in the senate long.  Clinton?  The Democratic front runner is as establishment as you can get, but her gender would be new to the Oval Office.  Bernie Sanders has been in congress since 1991.  There's a lot of "establishment" on the ballot.

I don't know of anyone who strongly dislikes John Kasich.  On the other hand...  Is anyone really in love with the guy?  Stephen Colbert on CBS said Kasich seems reasonable, and that's why he won't go anywhere.  He seems capable of getting some of those mid Atlantic and Great Lakes states, and building coalitions in the south would be difficult.

It has been said you capture Republican primaries by running on the right.  To win the general, you swing back toward the center.  I'm not sure if any of these guys can do that.  Democrats are faced with the opposite task. Primaries on the left.  Drift toward the center when you want to grab the moderates.  Again, a difficult task.

And, what if a third party guy gets in, like former New York Mayor Michael Bloomberg, or Donald Trump, if he feels mistreated by the Republicans?  We'll be longing for the good old days, of the two month Bush/Gore stand-off.  Hey, at least it made a great movie on HBO.

Super Tuesday is March 1, the biggest primary day of the season.  We should know the nominees March 2.
AT 12:00 AM