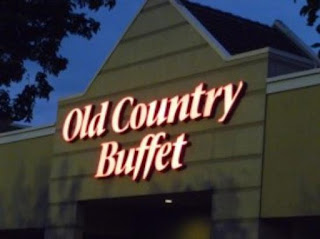 I should have gotten to this sooner...

Wow!  Did it trigger a response!

First of all, our area's gravy consumption has been cut in half.

Employees called to say they had been shabbily treated by management-- tossed out of work with no notice or consideration.  Their belongings were dumped.  They deserved better.

Several OCB loyal customers called or wrote to complain.  What does that tell us?  Apparently, people liked their food.  I don't know.  I've never been there.  I haven't heard many good things.  Above and beyond that, people were looking for a value and it seems that OCB delivered one.  Despite what the politicians tell you, we have a poverty problem around here.  It's nice to get out for dinner once in a while, and not spend an arm and a leg to do it.  OCB fit the bill.

Numbers don't lie, and successful restaurants don't close.  The chain shut 90 stores and filed for bankruptcy.  Something is wrong somewhere.

Unfortunately, workers lost jobs, and people looking for an inexpensive dinner and a night out are forced to explore other options.
AT 12:00 AM