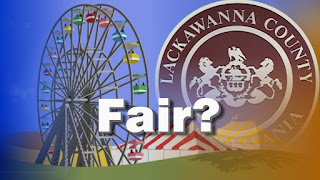 Lackawanna County has formed a committee to study the feasibility of establishing a county fair.

One of the commissioners says best case scenario is 2018.  It sounds like we already know what the outcome of the study will be.

On the surface, it doesn't appear to be a bad idea, especially if it doesn't cost taxpayers anything.

I do feel sorry for the churches and fire departments, and their picnics and carnivals,  who will have to work around the competition from the big and new kid on the block.  You know it won't be the other way around.  The county is the big dog.  It won't pick a week when fire companies and churches aren't doing anything, if such a summer/fall week exists.

It's just another way to slice the entertainment dollar pie.  I still marvel at the crowds the Viewmont Mall area restaurant row area draws.  It's nice to support your hometown church and volunteer fire department.  Add a county fair to the mix.  How much disposable income is there to go around?

It's more than scheduling.  What about the location?  A fair needs parking and admission revenue.  Find a big space where you can control access.  Lackawanna County Stadium?  Montage?

It doesn't hurt to study the issue.  A county fair does seem like a neat idea, but there is a potential down side, and we have to ask ourselves do we really need it, and is this the most effective use of our government.
AT 12:00 AM