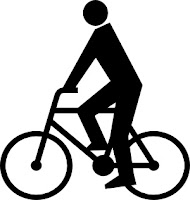 I took my first bicycle ride of the season early yesterday morning.  It's the start of my fifth season on two wheels, and I'm behind schedule.

Let me get you up to speed.  I sleep all day and work all night, and I try to keep the same schedule on my days off.  Believe it or not, it's easier than bouncing around.  As a result, much of my bicycle riding is by moonlight.

I do take precautions.  My bike has a light.  I wear a reflective yellow vest, like the ones highway workers use.  I do like riding in the dark.  The streets are almost empty.  It's quiet.  It's great think time, and "me" time.

The only fly in the ointment is the weather.  I have a 50 degree cut off.  If it's cooler than 50, the bike stays locked.

We had a warm spell back in April, but I came down with the nastiest of colds and it lingered for two weeks.  By the time I got better, a two week rainy spell arrived, and that brings us to where we are today.  I diligently watched the seven day forecast boards.  My eyes lit up when I saw a relatively warm night, and I knew bike season had arrived.

A quick review...  last year, I started riding in mid April.  My last ride of 2015 came the week before Christmas.  We had a bizarre and warm winter.  That last ride was one of the best ever.  It was such a strange experience to be pedaling through little towns and looking at Christmas lights.  My bike is usually in storage around Halloween.  I hope I am as lucky this year.

My first few rides of the new season are traditionally shake down cruises.  I don't go as far, and I avoid some of the major hills.  This year, I went for it and picked up where I left off in December.  No problem.  In fact, it was rather easy.

I shouldn't underestimate myself.  While I will never be confused with Charles Atlas, Lance Armstrong, or even Joe Snedeker, I do go to the gym three times a week, and spend more than two hours there each time.  The legs are in great shape.

Not much has changed.  Most of our roads are still shot to hell.  A lot of streets need better lighting.  There is a frightening number of small town empty storefronts.

As luck would have it, the weather is turning chilly again, especially during my moonlight bike riding window.  It looks like it should warm up toward the tail end of next week.

If you're out there, give bicyclists a little courtesy.  We'll do the same.
AT 12:00 AM