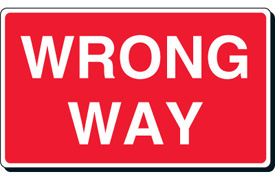 What a bizarre weekend it was.  I had two Interstate 81 wrong way crashes on my shift.

The Saturday night wrong way crash was much more severe.  State Police believe a pick up truck driver got on Interstate 81 around Harford in Susquehanna County and traveled a few miles before he hit a mini van.  The pick up driver died.  Two in the mini van died.  Six others were hurt.

We've had a rash of wrong way incidents in recent months, and some were deadly.

So, what do we do?  Better signs and lighting are a start.  State Police are finally working with local police to close entrance ramps when a wrong way incident is reported.  A Newswatch 16 investigation in Rhode Island shows high tech help is out there.  There are also some common sense solutions, including better signs and more lighting.

If you look at the incidents, most of the people responsible for going the wrong way are locals.  It happens in the middle of the night.

I can understand visitors getting confused by interchange designs, and there are some really bad ones out there.  I don't travel as much as I once did, but I remember being confused at unfamiliar interchanges.  Still, you have to work pretty hard to get on an interstate highway in the wrong direction.

With the cases around here, a lack of familiarity doesn't appear to be a factor.  I suspect the wrong way crashes are an alcohol problem more than a design issue.
AT 12:00 AM