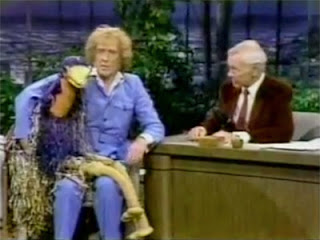 I was watching an old Johnny Carson show on WNEP2/Antenna TV the other night.  One of his guests was Rod Hull.

To refresh your memory, Hull's act was a scream.  He walked around with a giant emu puppet under his arm.  The emu was always on the testy side, and it attacked everyone in sight, including Carson and his other guest that night, Richard Pryor.

Hull was British.  He had two TV shows in England, but he was a frequent sight on American talk and variety shows for a while in the 80's and 90's.  I loved the act.

As I was watching Carson, I started wondering whatever happened to Rod Hull.  Why has he disappeared?  Why do I no longer see him and the emu?

An internet search provided a quick and easy answer.  Hull died in 1999.  He fell from a roof while trying to adjust a television antenna.