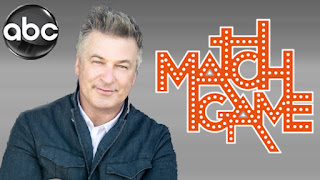 There are a lot of good things here.  The first one is the theme.  It's the one from the 70's run.  How could you not be happy when you hear that music?  The set looks great.  It's based on the 70's show, but with modern touches.

New host Alec Baldwin isn't bad, but he has to dump the scripted quips and be more spontaneous.

The word "celebrity" is used loosely here.  Of the six on the opening night panel, I recognized only two:  Rosie O'Donnell and Debra Messing.  Rosie is the new Richard Dawson, the one on the panel with the most common sense, the easiest one to match, the one contestants want for the big money Super Match.  If that isn't enough, Rosie has fun but still takes the game seriously.

Match Game isn't perfect.  Far from it.  It seems producers went the Family Feud route-- dumb it down, dirty it up.  It's disappointing, but I guess that's just television in the new millennium.   Plus, so much of the game depends on dumb luck-- picking the easiest of the two questions per round.

It proves that Match Game can work on TV again, even without the stars, host and chemistry that made the 70's version work.  A few of you might remember a 1999 revival that lasted only one season in syndication.  It was beyond awful.

ABC says the Sunday night Feud, Pyramid, Match Game block debuted to strong ratings.  if it stays that way, look for more games on prime time, and it beats a lot of the stuff you see there now.
AT 12:00 AM