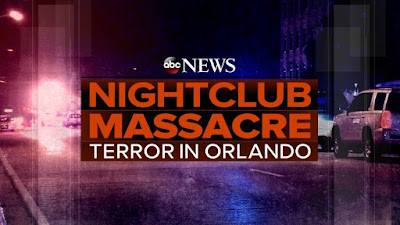 I have to groundbreaking thoughts on Orlando.  There is one person who knows why it happened.  He's dead.  There are no simple solutions to the gun violence and terrorism problems, and those who say they have all the answers really don't know what they're talking about.

The one moment I will take away from all of this occurred Sunday morning.  ABC's George Stephanopoulos was interviewing a woman who didn't know whether her son was dead or alive.  She feared the worst.  Unfortunately, she was right.

Stephanopoulos simply let the woman speak. He didn't interrupt.  The woman wanted the world to know what her son was like, the good he did, the lives he touched.  It was gripping television, and hugely uncomfortable at the same time.

I was in the WNEP newsroom when the story started to unfold.  Guidance from the network indicated something very bad had happened in Orlando, and the network was gearing up to break in to programming.  Because of Good Morning America and This Week, the network is fully staffed on Sunday mornings, and it didn't take long to get people in place and hit the right buttons.

As I was driving home, I spun the radio dial to get the latest.  I was extremely disappointed.  Nothing.  I'm sure the radio networks were doing something, but most radio stations are on auto pilot, so no one was there to override and switch the feed from regularly scheduled canned programming.

I was impressed that law enforcement kept the media, and therefore the public, constantly informed.  There were regular briefings with useful information, and the briefings started early.  It was crisis management as it should be.

I would hope that someday, we'll know exactly what happened and why.  Whether we can fix it is another story entirely.
AT 12:00 AM