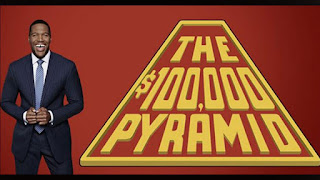 I have to admit I was pleasantly surprised.

ABC did a really nice job with this one.  The set has been updated, obviously, but several elements are still true to the original.  ABC didn't gimmick it up.  As opposed to recent versions, the boxes on the pyramid board are mechanical.  They actually spin to reveal a television screen with the subject.  I loved it.

Host Michael Strahan might have been the biggest surprise of all.  He moves the game along without being one of those hosts who thinks and acts like he's bigger than the game.

Night one wasn't perfect.  It appears the game has been dumbed down.  It was way too easy.  One of the opening celebrities was Anthony Anderson, who was simply awful.  Didn't the producers test celebrities first?   It's one of the things that doomed the recent pyramid revival that was on GSN.  The celebrities didn't know how to play the game.

If the ratings during the summer run show promise, I wouldn't be surprised to see the $ 100,000 back next summer, or even a new syndicated version.  There's a lot of potential here.