Things started to pop around 6 AM Tuesday-- Twitter, Facebook, phone calls, e-mails, scanners...  Something big was happening on Interstate 80 at Tannersville in Monroe County.

Photographer Jason was sent to check it out.  I stayed behind because I had one more state budget story to deliver for Newswatch 16 This Morning.  Just as I was wrapping up, we learned of the scope of what happened-- a multi vehicle crash, one dead, Interstate 80 east would be closed for hours, right in time for the morning rush.

I jumped in another car and headed east to meet up with Jason.  Since 80 was closed, Jason directed me to a back road where you could see what happened.  It was a frightening sight. 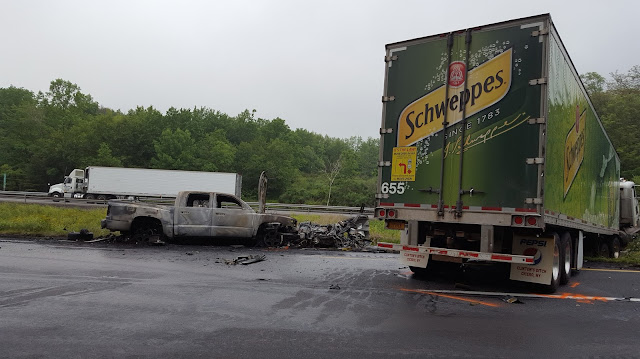 A car was heading west.  The driver apparently fell asleep, crossed the center grassy median, and slammed in to three other vehicles.  There was a fire.  It wasn't pretty.

State Police were exceptionally cooperative.  We had access to the scene.  They told us what they know.  Jason and I interviewed some of the first truckers at the scene.  We then headed down to Route 611, which was packed with traffic and crawling because 80 was closed.

Photographer Bonnie arrived with a satellite truck.  We had a great parking spot on a back road, with full view of the crash scene.  As luck with have it, massive trees blocked our satellite signal.  We then headed down the road a few miles to an Interstate 80 overpass.  You couldn't see the crash, but you could see an empty 80 east, which never happens.  The video was fed back to the station.  Bonnie plugged in the camera, I was live at noon, with a solid report, even if I do say so myself.

It was then time for the three of us, in three separate vehicles, to head back to the office.  We handed off to another Monroe County crew for the follow up, which included details on how easy it is for vehicles to roll across the median and wind up in the opposite lane.

Monroe County traffic was an absolute nightmare for seven hours, showing how our transportation system is fragile and easily disrupted.
AT 12:00 AM