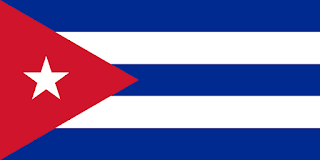 For 50 years, it was led by a brutal dictator.  Fidel Castro nearly triggered a nuclear war.  His citizens were willing to risk their lives to sail the 90 miles to freedom in the United States.

On the other hand, the missile crisis was a long time ago, and we are cooperative with other terrible regimes.

You can make solid arguments on both sides of the friends/enemies debate.

Fidel Castro is gone.  Raul Castro still runs the country.  You have to wonder if he'll make changes now that big brother isn't looking over his shoulder.  Plus, Raul is no kid.  It's possible his successor will moderate things a bit, but you never really know.

Fidel Castro's death was announced on my watch, early Saturday morning.  Being in a newsroom when something big breaks is always fascinating.  Closed circuit alarms with the networks start going off.  Email and social media begin to pop.  There was an upcoming broadcast to rip apart and reassemble with the latest information.  To say the least, this was not your usual Thanksgiving weekend.

Speaking of the holiday, I hope you and your family had a good one.  Thank you for all the nice comments over on Facebook.
AT 12:00 AM