As I wandered through the supermarket, looking at pumpkin spice everything, I started thinking about food fads.  Before I move along, pumpkin spice does absolutely nothing for me.  I guess it triggers warm fall thoughts, and it's a nice comfort flavor.  Personally, I think it's overdone.

Then, a coworker and I were having an on-line conversation about bagel sandwiches.  We were both in agreement.  Bagels make every sandwich better.  Yes, a bagel is calorie laden and not necessarily the most nutritious thing-- especially when you throw in a fried egg, a slice of cheese, and a few pieces of bacon.  You can't deny the delicious. 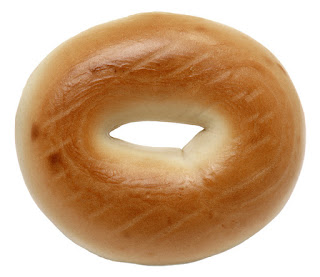 There used to be a bagel shop in Kingston, near the site of the old Price Chopper.  I don't remember the name, but I do remember what I always ordered there-- chicken salad on an onion bagel.  The bagel, in and of itself, was awesome.  The chicken salad contained the standard ingredients, but the chicken was diced rather than shredded.  I had never seen anything like it before, and I have yet to find it anywhere else.  It was a tremendous combination.

Speaking of sandwiches and breads, whatever happened to the pretzel bun fad?  That one came and went quickly.  I remember having a ham and cheese with spicy mustard on a pretzel bun from a mini mart.  Words could not express my glee.  The ingredients worked so well with the pretzel bun.  I don't even know if the option is available these days.  I do know the advertising has stopped, and that's sad.  It was nice for a change.

Again, bread isn't the best thing for you, but I always believed the best part of the pizza is the crust and the most important part of the sandwich-- especially a submarine, is the bread or roll.

Food fads come and go.  That's why they call them fads, and once in a while, it gives me material for a blog entry.
AT 12:00 AM