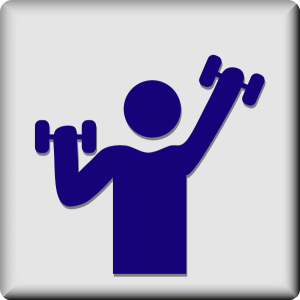 I don't recall the exact date, but it's coming up on the 5th anniversary of my gym membership.

Here's how I remember.  The gym I was interested in joining had a discount promotion going, but I didn't make it in time.  I was tied up covering the aftermath of Hurricane Sandy and the presidential election.  I told the story to the guy at the membership desk-- and he was kind enough to give me the lower promotional rate.

Five years later, I'm still a loyal member. I visit three times a week, religiously, on my days off.  I cut back to one or two  per week during the summer when I'm riding my bike.

Those first early days were comical.  I had no idea what I was doing.  Thankfully, some gym veterans helped me go through the settings on the machines.  Plus, the time passes quickly when you have someone to talk with.  I made some good and new friends, which is more important than the exercise.

The routine varies a bit, but it's generally the standard fare-- a little bike, treadmill, stepper, elliptical, and I've added some weights to the mix.  Sweaty clothes, a hot shower, and I'm back in the car and on the way home.  It's also a great opportunity to catch up on the news.  The gym has a nice rack of TV's overhead.

I'm toned, especially the legs-- but there is much more work to do.  My bad diet negates a lot of my gym work.  At least, I'm stable and not regressing.

Occasionally, I think of all the people who have come through that gym during my five years.  The core of regulars remain.  So many others  have joined.  So many have given up.  I think I know the reason.  It takes a while to see results, and we are an impatient society.  The advice:  start small, have modest goals, get on a schedule.  A little bit of something is better than a lot of nothing.