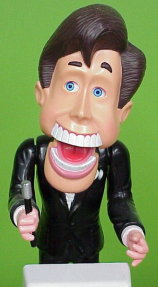 I used some of my vacation time to watch a documentary produced by the BUZZR network.  BUZZR features old game shows.  No one around here carries it, but it was uploaded to YouTube.

Alex Trebek narrated and hosted.  He interviewed game show hosts, past and present.   I loved hearing how people like Wink Martindale, Drew Carey, Pat Sajak, and Howie Mandel got their jobs.  Legends like the horribly underrated Tom Kennedy and Bob Eubanks had some input.  Chuck Woolery told the story of how he was fired from Wheel of Fortune.  Minus commercials, it was a solid and entertaining 90 minutes.

I grew up on 60's and 70's game shows, and before you laugh, think about this.  Those shows were a tremendous aid in vocabulary building and quick thinking.  Allen Ludden said one of the things that made him proud was how Password was used in schools.  I've been out of the education game for some time, but I hope it still happens.  You'd be amazed at how many times I encounter young people, on and off camera, who can't express themselves.

By the way, CBS is working on a Name That Tune update.

The BUZZR documentary was under the umbrella "Game Changers."  I don't know if the network plans more, but I hope so.  Game shows are a huge part of television history and American culture.  It's time the genre is celebrated.
AT 12:00 AM