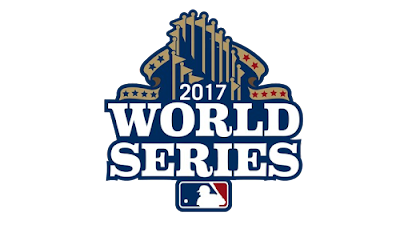 I'm looking on the bright side.  At least I won't have to endure the insufferable John "Bigger than the Game" Sterling call Yankees' games.

Both are great teams.  The Dodgers return to the World Series after 29 years is a good story.  The Astros are no slouch.  They represent a city that was slammed by a hurricane, plus there are some fine young stars.

Heart says Houston.  Head says Los Angeles.  I have a much better track record in the Super Bowl, so pay no attention to any predictions here.

Even though I'm annoyed with baseball, I did catch parts of several playoff games.  Please, get rid of the strike zone box and pitch speed indicator.  Game announcers were fine, and I'm a Joe Buck fan.  Pre and post game studio shows on FS1 and TBS were too long.  The participants didn't have much to say.  I really wasn't impressed with the MLB Network crew, either.

Baseball has its problems.  Teams that drop out of contention get rid of their best players by Independence Day. Oakland plays in a dump and can't draw fans.  The league is talking about expanding to Portland and Montreal, along with a major realignment.

World Series games after my bed time, but I might be able to catch some innings.  I really don't care who wins.  I would like to see the series go to seven games.  The seventh game of a World Series is about as exciting as it gets.
AT 12:00 AM