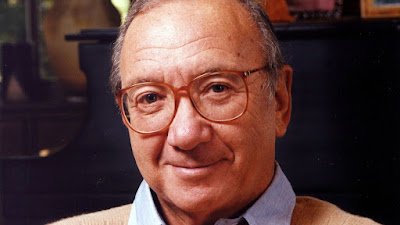 My Marywood College degree is in communication arts with a specialty in radio and television.  However, there was considerable exposure to the theater department.  Oh, how I remember how those folks turned up their snobby noses at Neil Simon.  It was populist, light comedy pap, and it was beneath them.

I will admit that Neil Simon didn't pen heavyweight stuff, but it was enjoyable and people really liked it.

When you think "Simon," of course, the "Odd Couple" comes to mind-- especially the way Tony Randall and Jack Klugman brought it to life for five seasons on ABC. Who didn't love that-- the play, the movie, the series...

Personally, I was a "Prisoner of Second Avenue" fan.  The movie, starring Jack Lemmon and Anne Bancroft.  1975.  If you haven't seen it, find it.  It's sad and funny at the same time.  You'll laugh one minute and shed a tear the next.  It's real.  Plus, Marvin Hamlisch did the music.

OK, Neil Simon was no Shakespeare...  But, he did bring millions into Broadway theaters and movie theaters for years.  He entertained people and he did it well.  Never turn up your snobby nose at that.