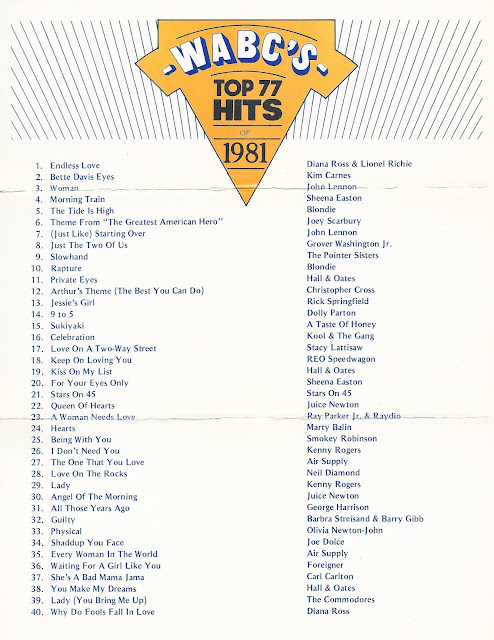 I haven't had the opportunity to take many pictures lately.  I came across this as I was looking at some old radio stuff recently, and I thought some of you might get a kick out of it.

WABC 770 in New York City might have been the greatest radio station of all time.  Yes, I know some will argue.  Great music.  Great personalities.  Great presentation.  The station dominated in the 60's and early 70's.  A shift to disco didn't help build an audience in the late 70's.

By the late 70's, FM was making inroads and WABC was faltering.  It became a rather average adult contemporary station.  WABC went to a talk format in 1982, and a lousy talk format at that.  WABC still talks, and it's ratings are down at the bottom of the NYC heap.  It's sad, really.

WABC used to do a yearly survey, and you could get a copy if you sent a self addressed stamped envelope, which I did.  They spent some bucks on this.  The survey was on heavy stock, almost cardboard.  It was really well done.  This is the first half of 1981's survey.  As I am fond of saying, it's the music that killed AM radio.

The second half is on the back, and I will post that tomorrow.
AT 12:00 AM