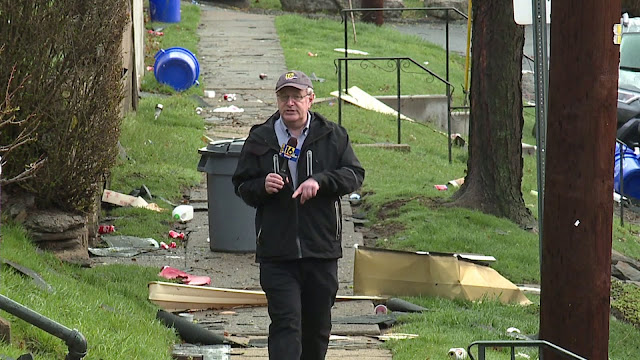 Today's entry is something only people in the business will really understand, but I'll go for it anyway.  In 14+ years of writing this blog, I've discovered that readers really do like the "behind the scenes" stuff.

My Monday morning assignment was to take a look at the tornado that hit Scranton.  I've been doing this a long time, and will never cease to be amazed at the power of nature.  Photographer Jason and I walked around the Hill Section of Scranton.  Devastation everywhere.  Nothing destroyed, but dozens of homes damaged and trees down.  We talked to several people who shared their storm stories.  Jason shot the video to match.

It was then time for what we in the business call the "stand up."  At times like this, I think of my first television news director, the great Jim DePury.  He drilled in to me there should always a reason for doing the stand up at a particular place.  Don't just stand in front of a building reciting facts.  I sent Jason up the block so he could shoot me from a distance   I walked and talked about the debris that littered the neighborhood.  It worked, and it tied the whole piece together.

Here's what put the story over the top.  I asked for and was granted extra time by noon producer Teresa.  My story went nearly two and a half minutes, an eternity in TV time.  However, it's all relative.  There were several different elements and some great video, including drone shots.  It was a fast piece and didn't feel like two and a half minutes.

Editor Corey, who also piloted the drone,  made sure it all worked nicely, and it was part of some outstanding team coverage at noon.  My heart goes out to the storm victims.  I hope the recovery is swift and smooth.
AT 12:00 AM