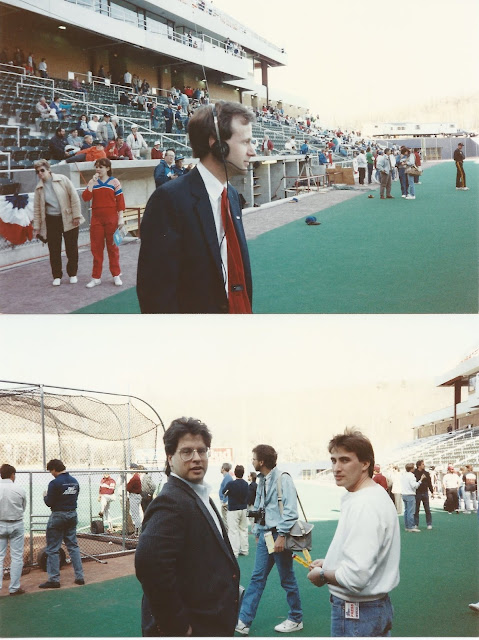 Above, two more pictures from opening night of Lackawanna County Stadium, 30 years ago.

The first is me.  I was working at WARM at the time.  We were not the official Red Barons station, but we acted like we were.  Most of our afternoon and early evening programming came from the ballpark in Moosic.  A few members of the news team put together plenty of material for our news broadcasts the next morning.  It was a kick butt week.

The second photo is two old friends.  That's Joe Thomas on the left.  I'm not sure if he had joined WARM at the time, or if he was still at the old WCDL.  Great guy-- a true professional and a lot of laughs.  I always enjoyed his sports call in shows, and "Randy from Throop" has been silent since Joe moved on to other things.

The man in the white sweatshirt on the right is Jack Kearney.  I didn't know Jack at the time this picture was taken.  He was a director for the old, old, old WYOU, and we later worked together for about seven years.  I always enjoyed working on Jack's broadcasts.  There was great comfort in hearing Jack in your ear.  He had your back, and he had the skill to make you better than you actually were. I was not alone.

Jack tried to get me away from abruptly moving from one camera to another when I was anchoring.  Any time I make a nice, fluid move, even now, I think of Jack.  Looking back on my early TV years, I learned so much from the photographers and the technical people.  Those on the editorial side get so much of the credit.  It's all those others who really hold a station together.