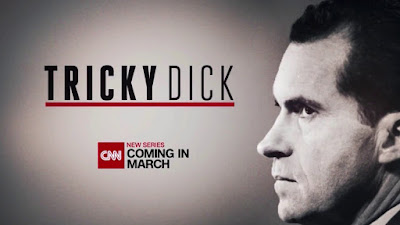 One advantage to being stuck in bed with an intestinal illness this week was having the opportunity to watch the first two episodes of CNN's "Tricky Dick" documentary.

As previously noted in this space, I felt that with a title "Tricky Dick," the series was destined to be a hatchet job on the 37th president of the United States.

While considerable time was dedicated to Nixon's sobering seriously sinister side, I think it's been fair so far.

Nixon has always fascinated me.  Dan Rather said, at the time, no one was more prepared to become president.  He was a smart man, always studied the topics and challenges he faced.  He was the first president to understand television and he tried to manipulate it, and control the message.  Unfortunately, Nixon's demons got the better of him, and you know the rest.

You really had to admire how he took a brutal loss in 1960, and another in 1962, and got up off the canvas to win in 1968.  Vietnam ended on his watch.  There were historic trips to China and the USSR.  It was fascinating stuff.  Nixon was a foreign policy genius.  Yet, a two bit burglary and an amateurish cover up brought him down.

Ben Maller on FOX Sports Radio always says the better stories are in the losing locker room, and Richard Nixon has always been on my short list of dream interviews.  I'm looking forward to seeing the rest of the series.
AT 12:00 AM