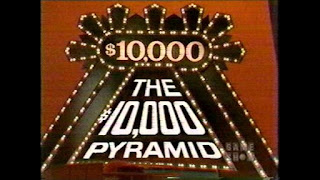 If you've read this blog for any length of time, you know I love old game shows.  there has been many an afternoon watching some classics on YouTube.  While the current $100,000 Pyramid on ABC is fairly true to the original, there is something I really miss.

Here it is.  I loved the way the category boxes would have a hard snap on the reveal.  There were people doing the movement behind the giant game board because there was no machine sound, as there was on the old Concentration.  The way those boxes would spin fast added so much excitement to the moment.  By the way, I read a book written the original Concentration producer.  He said they tried and tried to conceal the noise of the machines that spun the prize and puzzle pieces.  They just couldn't do it.  The producer and production staff later learned the audience grew to like and appreciate the noise.

Apologies to the younger people out there, who have no idea what I'm writing about.

The aroma part deals with a recent to trip to a supermarket in a rather large shopping plaza.  A crew was hard at work, with hot asphalt, patching a myriad of potholes.  There is something about the smell of hot asphalt that says "summer."

And finally, Tom Ellis died this week.  He anchored the news for all three major Boston TV stations, plus new England Cable News.  Look up "anchor" in the dictionary, and you will see a picture of Tom Ellis.  He had the look, the presence, and especially the voice.  I remember always seeking him out on TV when I would vacation up north.  Tom Ellis was 86.
AT 12:00 AM