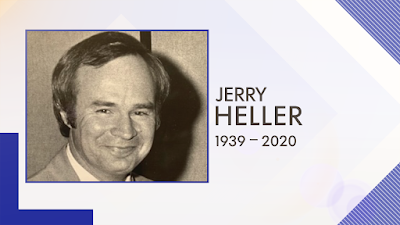 Let me tell you about my first and only radio news director, Jerry Heller.

Jerry might have been the most frugal man I ever worked for.

When our WARM 590 newsroom black and white tiny television finally died, Jerry went shopping for another B&W model.  It didn't work.  They stopped making them.  WARM was forced to go color.

When our news cars needed replacing, Jerry sought out the least expensive model on the market.  I went nuts when Jerry told me what he had in mind.  I wasn't getting in one of those shoe box sized cars.  We compromised and got a slightly better model.  Vinyl seats.  No air conditioning.  I will never forget them.

That stuff is amusing, but minor.

Jerry was perhaps the most kind and patient manager I ever worked for.  We had a few knock down, drag out exchanges during my 10.5 years at WARM.  He should have fired me at least a half a dozen times.  He never did, and I will always be grateful.

I took an unusual path in to the WARM newsroom.  I was the weekend overnight guy, playing the religion and public affairs shows, starting while I was a sophomore at Marywood.  I was on the air at Marywood, and for some unknown reason, WARM's afternoon DJ, the great Tim Karlson,  took an interest in me.  Tim had me read news copy on tape and critiqued it.  When he felt I was ready, Tim played the tapes for Jerry, and I started getting sent out on news assignments, with the occasional anchor shift.

As I have noted before, I took a heavy course load my first two years at college, plus I took classes every summer.  It meant I had a lot of free time toward the end of my college days, allowing me to take on additional assignments at WARM.

When I anchored at night, Jerry occasionally used some of my copy the next morning.  I would go over the scripts the next day, observing the changes Jerry made, and learning how to be a better writer.  There were also little tips and tricks along the way-- allowing me to be smarter, faster and more efficient.

Jerry had a great news anchor style-- smooth, steady, dependable.  He was the solid and reliable voice you wanted coming out of your radio every morning.

I've gone in to it here before.  There was some tension between Jerry and myself when I left for WYOU in September of 1991.  We bumped in to each other a couple of times before he retired.  Cordial.  Professional.  Nothing special.

I should note that Jerry left WARM a few years after I did.  I wasn't there at the time, and I don't know exactly how things played out, but I will say Jerry deserved better from the company.  Jerry moved on to work on public affairs broadcasts for WVIA TV, and produced some great stuff.  He knew Tropical Storm Agness as well as anyone.

Jerry was diagnosed with Parkinson's and was involved in a severe crash early in 2019.  He was in the intensive care unit of a Scranton hospital.  A former coworker told me about it and suggested I stop by the hospital for a few minutes to say hello.

I hesitated, not sure of the reception I'd receive, if I would be welcome.

Jerry could not have been more kind.  It hurt to see my old boss stuck in bed, suffering from Parkinson's, suffering even more from injuries caused by the crash.  We had a nice talk about  the old days, and the current times.  The familiar voice was weak, but it was still there.

I thanked Jerry for all he did for me, adding that I could not have accomplished anything without his foundation.  Typical Jerry.  He said I would have been okay, even if we had not crossed paths.  Jerry was wrong.

I like to think I carry a little bit of every person I ever worked with when I stand in front of a camera or behind a microphone.  Yes, a little bit of many, many people-- and a lot of Jerry Heller.
AT 12:00 AM