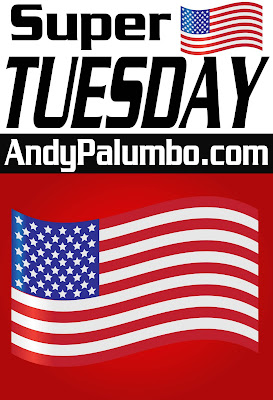 Iowa and New Hampshire were charming.  Nevada was quirky and South Carolina gave us a nice taste of the south, but today is when it gets real.  It's Super Tuesday.  Voters in 14 states go to the polls, from California in the west, to Maine in the east, from Minnesota in the north, to Texas in the south.

Understatement:  there is a lot at stake here.  Will candidates from the northeast do well in the south and west?  How will Bernie Sanders' socialism appeal to southerners?  Does Joe Biden, fresh off that win in South Carolina,  really have all that strength with minorities?  Will the moderates show their ability to move the Democratic party back to the center?  Can Elizabeth Warren hang on?  What will Michael Bloomberg do?  I thought Pete Buttigieg would stay on until the Super Tuesday numbers were in, but he bailed after South Carolina.  The same goes for Amy Klobuchar.  Several organizations report those last two candidates had a talk with Barack Obama, who is apparently trying to sway his party away from Bernie Sanders.

I doubt all the results will be in for tomorrow's blog entry, but there is a chance.  It's likely there will be a little analysis later in the week.  I think it's safe to say results will be spread out across the board.  Sanders and Biden will do well. We'll get our first look at how much support Michael Bloomberg has. It will be a fascinating night.

By the way, you know this is a big deal when ABC is blowing out three hours of prime time to cover it, plus NightLine, plus World News Now, plus ABC News Live.

Many of the cable network pundits are predicting a brokered convention.  They yammered endlessly about the same thing when the Republicans had a huge field of candidates four years ago.  It's a case of too much time to fill and not enough to say.  The Democrats will settle on someone and it will happen long before the convention in Milwaukee this summer.