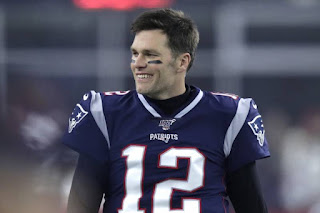 Tom Brady made it official yesterday.  He is a free agent and is leaving the New England Patriots.

So, if I owned an NFL team, would I sign him?  No.  I'm sure he wants a ton of money, and I would be reluctant to shell out the bucks for a 43 year old who is coming off an average season.

There would be one exception-- If my team needed a stunt to put butts in the seats. San Diego is moving in to a new stadium.  The Raiders are moving in to a new city.   I'm sure Brady's next team will see a boost in ticket sales, but think of everything else that could be done with that Brady money.

Is he the GOAT, Greatest of all Time?  I'm leaning that way, but Tom Brady was in the middle of the perfect storm-- the right team, the right teammates, and the right coach,  at the same time.  I doubt he would have had the same success if he landed with the Jets or the Bears, or the Dolphins.  He would have improved them, but six Super Bowls is a very long shot.

Tom Brady will always have the black mark of "Inflategate" against him, but you cannot dispute his winning record and all those Super Bowls.

As I write this, it appears Tom Brady is headed for Tampa Bay.  He'll get a fat pay check.  $30 million a year.  The Buccaneers shouldn't clear out shelf space for the Vince Lombardi trophy just yet.

It just might be time to retire with dignity.
AT 12:00 AM