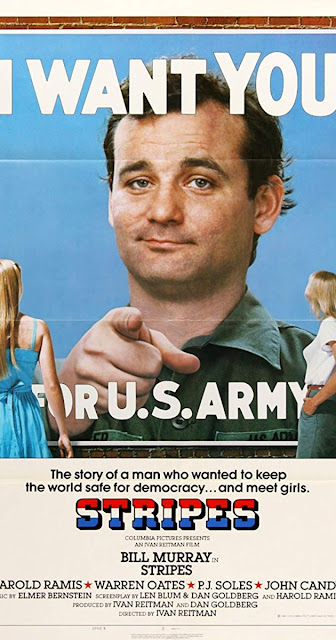 I usually don't watch movies on television.  chances are, I'm going to follow asleep.  There was an exception the other day.  "Stripes."  I saw it in a theater in 1981.  There have been all or partial viewings on television many, many times since then.  If i stumble across it, I'm going to stay for a while, and I stayed for the whole thing on a recent showing.
A great movie?  No.  A darn fine one?  Absolutely.   Entertaining from beginning to end.
The movie works on many different levels.  It's a great screwball comedy.  Even more importantly, there's a story here.  It has a beginning, middle and end.  Plus, you get caught up in the characters.  I have yet to meet the person who didn't like it.
So often, people look down their noses on basic comedies.  "Stripes" is funnier than most.
AT 12:00 AM