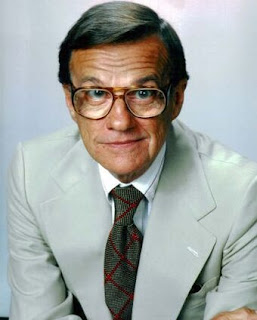 The man was a genius-- hosting dozens of game shows over the years, appearing as a panelist on countless others.  Lightning fast wit.  He had fun, but never at the expense of a contestant.  He had a charm that made people feel at ease, and that includes viewers.

Pyramid host Dick Clark paid Bill Cullen the ultimate compliment when he said the only time he became nervous behind the Pyramid podium was when Bill Cullen was a guest, because he was so good.

Fellow game show host Peter Marshall said Cullen's skills kept shows on the air that should have been canceled long ago.

Like all the great ones, Bill Cullen made it look easy.  In April of 1980, Allen Ludden was in the hospital and Cullen stepped in to host "Password Plus" for a month.  He did a great job and ran the show flawlessly.

I won't go in to a lot of history here.  You can read it on the internet.  I just thought I'd mention it because we should remember one of the industry's giants.
AT 12:00 AM