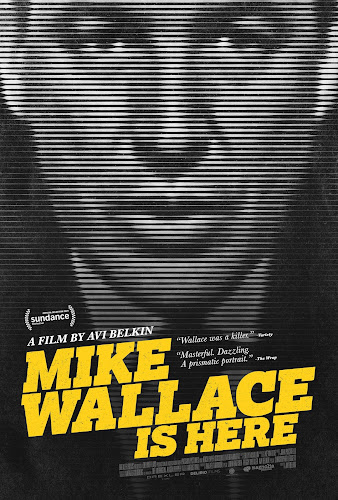 The DVD had been sitting on my shelf far too long, and I finally had the time to watch it during last week's vacation.

The producer calls "Mike Wallace Is Here" a "film," not a documentary.  Regardless, it was 90 minutes of fascinating entertainment.

There is no narration.  It's just a series of clips and interviews documenting Mike Wallace's life, from boyhood in Massachusetts to "60 Minutes" stardom.  Just about everything is covered, including the death of Wallace's son, Peter, and the crushing depression that resulted in a suicide attempt later in life.

There was one area I found lacking.  For those of you not familiar with Wallace's early work, he did it all-- actor, game show host, commercial spokesman, and some tabloid type interviews.  Wallace mentions that he wasn't liked when he arrived at CBS and there really isn't enough on those early CBS years.  How did he get the job?  Who tried to freeze his out?  In spite of it all, how did he get the plum assignments of following Richard Nixon's 1968 campaign, convention floor reporter and "CBS Morning News" anchor?

Wallace mentioned Don Hewitt selected him for "60 Minutes" because he and Hewitt were two of the misfits at CBS News.  I wanted more of that.

There is nothing new in this film.  It's just a series of old interviews, but they are assembled in a way that traces the path of Wallace's life and career.

"Mike Wallace Is Here" is a wonderful reminder of what a talent Mike Wallace was.  The "gotcha" stuff and ambush interviews generated much of the heat, but it should not be forgotten that Mike Wallace was a fearless interviewer.  His celebrity profiles are classics.

If you can get your hands on a copy of "Mike Wallace Is Here," do it.