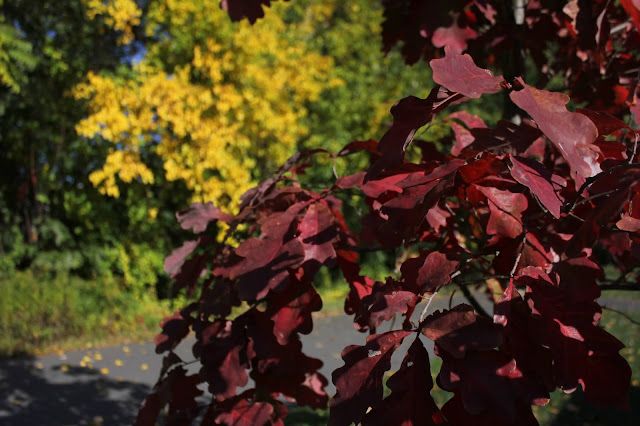 I put this one up on social media recently, with the promise of telling the little photography tale behind it.  Well, it's really not much of a story.

I had a couple of goals the other morning-- shoot some leaves and put the standard kit lens through its paces with depth of field experiments.

Serious photographers look down their noses at kit lenses, the ones that come with the camera.  I get that.  Versatile?  Yes.  Capable of producing interesting images?  Sometimes.  I wanted to play with depth of field and background blur, so I opened it up as far as it would go-- 3.5.  It's OK, but prime lesnses I carry with me can do better.  I shot on Av, and my camera seemed to over compensate for the bright sunlight by giving me a very fast shutter speed.  That means a slightly underexposed photo, and I fixed that with some post production.  It's also possible the camera overcompensated for the bright yellow leaves in the background.

It's hardly a Top Ten photo, but I do like the end result.  I'll go in to a little more detail on Sunday.