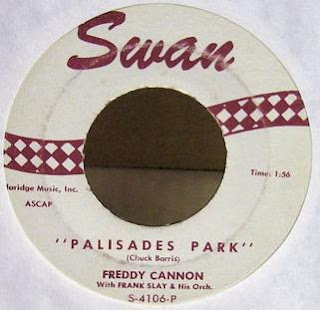 We will take a convoluted path to our destination today.

I always considered the late Chuck Barris a genius.  I didn't care for all of his productions, but it's safe to say the man was a game changer in the game show business.  Barris said he wanted to do game shows, but he didn't want to do the tired question and answer format.  Barris created "The Dating Game" and "The Newlywed Game," among others, and the rest is history.

Chuck Barris wrote a handful of books.  "The Game Show King:  A Confession" is one of my favorites, and it's not just about game shows

What brought all this to mind is a couple of recent car trips.  I happened to hear a Barris creation, "Palisades Park" twice in two days.  Barris wrote it. Freddy Cannon brought it to life.

One of the joys of music is it can magically transport us to a time and place.  What a fun song this is!  It's a reminder of a simpler, and a safer time.  Yes, it was during the Cold War, but Vietnam had yet to get rolling.  JFK was still alive.  The Cuban Missile Crisis came and went.  Polio was on the way out.  Our gaze extended in to space.

I never visited the actual Palisades Park.  I didn't have to.  Chuck and Freddy took me there.  Thank you.