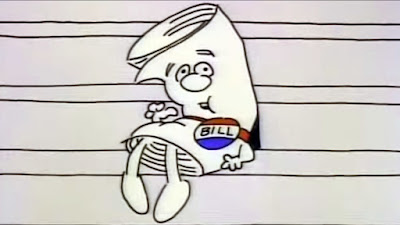 I don't have kids.  There are no children in my family, so I have no idea what the young ones are watching on television these days.

I do consider myself lucky to have grown up when I did.  It was a time when Bugs Bunny and his friends were alowed to beat the snot out of each other.  It was also a time when there was good stuff between the shows.

One of my favorite pastimes is tooling around for nostalgia on You Tube.  I stumbled across a few episodes of ABC's "Schoolhouse Rock" from the 70's.  Two favorites: "Conjunction Junction" and "I'm Just a Bill."  The music and narration were great.  Kids learned more in two minutes than they did in an entire week of English and History classes.  Masterpieces.  They still hold up today.

While ABC was doing that, CBS filled the time between cartoons with "In the News."  They were single topic mini newscasts.  Christopher Glenn narrated.  I don't know who wrote and produced them, but the people responsible talked TO kids, not DOWN TO kids, and that's not an easy feat.

There are rare occasions when television gets things right.