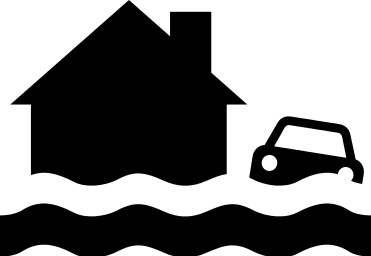 It was the most challenging day, and possibly the most rewarding day of my career.

Let's take you back to a Saturday morning at this time exactly 25 years ago.  We had two snow storms, followed by a quick thaw and some rain.  Rivers, creeks and streams were coming out of their banks.  Flooding everywhere.

Friday was a tough day, and we knew the worst was ahead.  I was working "down the street."  The news director, who I really liked and am still in touch with, was looking for people to work Saturday morning.  The news director had just made a series of personnel moves that were unpopular with many on the staff, so everyone had an excuse to avoid coming to the office.  It was pay back time.  I was unaffected by his moves and I understand why some were pouting.

I considered the news director a friend, then and now, so when he asked, I agreed.  My job was to do Saturday morning updates on the hour and half hour .  We started early and it was clear there was going to be trouble.  Part of the Wyoming Valley was being evacuated.  Sections along the Lackawanna River were already under water.

January/winter flooding is especially difficult.  A damaged furnace also means frozen pipes, and it's simply too cold to open the windows, hoping the fresh air dries out the house.

Finally, just before 9:30 AM, the news director said simply "keep going."  What followed was a two and a half hour plus newscast without a script.  At the risk of offending people by forgetting who did what, I will name some of the key figures.

Eileen Kennedy produced from the control room, and I would have been lost without her directions in my ear.  Derry Bird was our forecaster that morning.  Derry knew weather, and he also  knew news and history.  We sat on the newsroom set together to talk about why things were happening, after the round up of numbers.  Barry Finn, who we lost last year, Melissa Becker Sgroi, and David DeCosmo were live in the field.  Producer Chris O'Rourke, was phoning in reports from the Danville area.  We also had a fantastic control room staff, who pushed all the right buttons at the right time.  I can't leave out the photographers, who captured amazing images.

The same was true even way back then-- I drank a lot of diet cola that morning.  When the river stabilized  just after noon, I signed off and turned things over to the evening news staff.  My first order of business was to make the long dash down the hall and up the stairs to the men's room.  Made it!  Barely!

Right after taking care of business, I was sure to thank my coworkers who helped me look really good that morning.

It was a tough day here in our area-- damaged homes, cars and businesses.  I hope we all made it a little better 25 years ago by giving you the information you needed to make it through the experience.