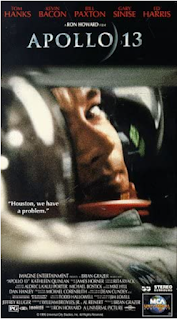 I've written about Apollo 13, the event, here before.  I don't think I've discussed the movie-- until now.

"Apollo 13" is one of a handful of movies that I just can't turn away from when I stumble across it on television, and it happened again this past weekend.  Like the great "Quiz Show," you know it's a good movie if you watch until the last frame, even though you know how it ends.

"Apollo 13" is more than a great drama.  It takes you back to a time and place.  For me, it was third grade.  As I've noted here before, I vividly remember my public school teacher leading us in prayer for the safety of the astronauts.  Now, you'd get hung by the toes for that.  She died in 2002, and I always regret not thanking her for the gesture.

I did really enjoy how the producers and director Ron Howard used clips from actual news broadcasts.  It's always a treat to hear Frank Reynolds, Howard K. Smith, Jules Bergman, Chet Huntley and Walter Cronkite again.  Their coverage kept me glued to the television, before and after school, for the week.

Sadly, I never saw "Apollo 13" in a theater.  I'm told the visuals and the sound are amazing.  Maybe, if the current situation ever passes, some theater that does retro once in a while will book some showings.

Until then, I'll keep channel surfing.