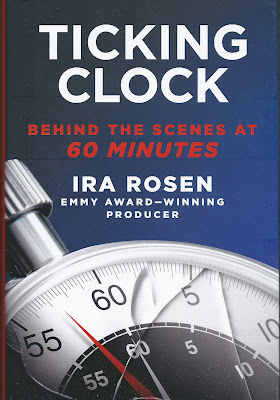 What drew me to "Ticking Clock" repulsed me at the same time.

Former producer Ira Rosen wrote a book about the inner workings of "60 Minutes" on CBS and "PrimeTime LIVE" on ABC.  He worked for both.

The Kroft item was especially graphic, and in fairness, it had been reported elsewhere.

There are those who come across as decent and professional-- Charles Gibson, Bill Whitaker, Bob Simon, Chris Wallace, and Lesley Stahl.

Charlie Rose falls in to both categories-- a great reporter and interviewer, but a bad man.

The same goes for "60 Minutes" creator Don Hewitt.  His misbehavior doesn't rise to Rose level. but he could have treated some people a lot better, and he shouldn't have turned a blind eye to abuses taking place in his offices.

There is enough here to keep the TV geeks happy, while still appealing to the general population because of its tabloidy aspects.

There is one chapter, toward the end, that deals with the personal and professional ends of some of the industry's giants.  Interesting?  Yes?  Depressing and sad?  Exceptionally.

While reading the book, I constantly had the feeling that newsroom confidentialities were being violated, and most of the people who took the most savage beatings are dead and can't defend themselves.

Major League Baseball clubhouses have a sign that reads "What you see here, what you say here, what you do here, STAYS HERE!"  There are many times I think the same signs should be in newsrooms.

That shower after I finished the last page sure felt good.