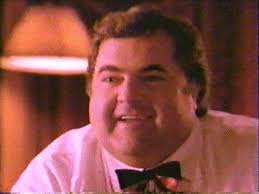 Hal Linden said the thing that made "Barney Miller" work was they realized the regulars were not the comedy on the series.  It was the people who came through the squad room who provided the laughs, and the regulars simply reacted to it.

One of those funny people died the other day.   Walter Olkewicz.  He only did two "Barney Miller" episodes, and I'll describe my favorite appearance in a moment.  Look him up on IMDB.com.  It's an impressive body of work, including the highly regarded "Twin Peaks."

Getting back to my original point, this particular episode of "Barney Miller" dealt with Det. Harris losing a court case and being forced to pay money he didn't have.  His life is crumbling around him.  The closing scene involves Walter Cushing, played by Olkewicz, in the cell for creating a disturbance, singing "High Hopes" as Harris loses it at his desk.  It's a classic.

I also have to not the passing of James Hampton.  He played the bugler, Hannibal Dobbs on "F Troop."  It was one of those series that was totally absurd and simply great fun.  You would never be able to get away with some of those gags today.  Hampton is another one of those actors who was in everything, but I was surprised to learn "F Troop" lasted for only 65 episodes.  I would have bet there were more.