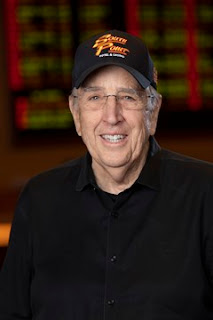 I've been writing quite a bit about sports broadcasting lately.  After all, it has been a year of change.  The latest went down last week.

Brent Musberger announced he is stepping aside as radio play-by-play voice of the Las Vegas Raiders.  Musberger is 83 years old.

In my book, Musberger is one of the best overall sports broadcasters of all time.  When you heard that voice, you knew it was a big game-- whether he was in the studio or at a stadium.

He practically invented the role of studio host.  After CBS dumped him in 1990, it was on to ABC, where Musberger excelled at college football.  By the way, Musberger's CBS days included hosting the NFL pre game show, plus pro and college basketball.  He was going to to baseball, but CBS fired him just before the baseball contract kicked in.

Musberger developed a radio network based on gambling, which he sold to Draft Kings for an obscene amount of money.

My brush with greatness-- I rode in an elevator with Brent Musberger in West Virginia University's Morgantown football stadium.  I was too frightened and intimidated to speak.  The photographer I was working the Penn State game with started the small talk-- mostly concerning Morgantown's horrific traffic situation.  Brent agreed.  It was among the worst on his travels.

I should add that Musberger was also a Los Angeles news anchor for a while.  Some videos are on YouTube.  Great work.

I don't know what's next, but a giant has departed the stage.