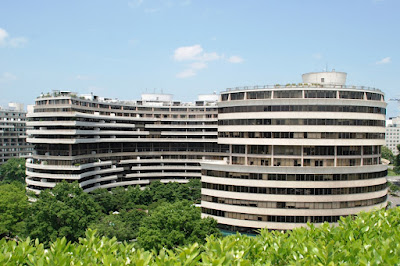 If you lived around here 50 years ago, you were more concerned with the Agnes flood.

However, it should be noted that we recently passed the 50th anniversary of the Watergate break-in.  Some guys for Nixon broke into Democratic headquarters at the Watergate building in Washington.  The break-in led to a president's downfall and the annoying habit of putting "gate" after every scandal ever since.

When it came to light, it didn't seem like a big deal.  Woodward and Bernstein proved otherwise.

It was also so pointless.  President Nixon was on his way to a landslide victory.  He didn't need dirty tricks, but paranoia got the better of him.  The Democrats were still reeling from the JFK and RFK assassinations, and the party dissent of the 1968 convention.  1972 was more tranquil, and George McGovern came out of the primaries with an overwhelming number of delegates.  Still, he was a weak candidate going up against a popular president at the time.

Lessons learned?  It's not the crime.  It's the cover up.  Plus, the big one:  journalism matters.