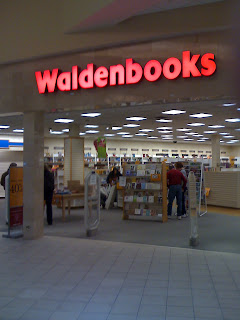 Going to the mall these days is like going to a funeral home. You don't shop. You view the remains.

I pulled the overnight shift Tuesday morning, so my day was free. I dropped by the Wyoming Valley Mall in Wilkes-Barre Township to visit Waldenbooks for the last time.

The company is closing under performing stores, about one hundred, around the country. The Wyoming Valley Mall store has been open for 38 years. It is one of the mall's original tenants.

There are other book stores around, including some very good ones. We'll get by, but this store will really be missed. It was the mall's one and only book store. Plus, there was sentimental value.

I liked Waldenbooks-- not too big, not too small. It had everything you needed. I remember going there as a kid. It was the first of the really cool book stores. You were guaranteed to find something you liked on the shelves and racks.

The mall's manager was quoted in a newspaper story as saying it's a Waldenbooks problem-- not a mall problem. That may very well be true, but I did visit some other mall stores yesterday, including the big department stores. Some were practically giving stuff away, and there were few takers. It was sad, and it was frightening.

Waldenbooks closes Saturday. You wonder who's next.
AT 12:01 AM