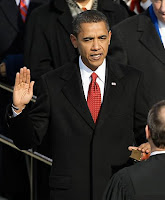 I have to admit, I'm a little surprised.

The early ratings are in for Tuesday's inauguration of President Barack Obama. Judging from the interest generated, and the millions of people who converged on Washington, I thought the Obama inauguration would be the highest rated of all time. I was wrong. It was number two. (source: Mediaweek.com)

Tuesday's inauguration finished behind Ronald Reagan in 1981, and just ahead of Richard Nixon in 1969, and Jimmy Carter in 1977. I can understand the Reagan thing. He was sworn in as the hostages were flying out of Iran, and it meant there were two huge news stories happening at once.

The Tuesday numbers are subject to change, once the ratings are calculated for smaller areas of the country, and you also have to remember we live in a digital age. The ratings don't count the number of people who watched the inauguration over the internet.

It's possible the Obama inauguration was the highest rated of all time. The problem is with the audience measurement method.

While I'm at it, a few words on the event itself. Beginning with Saturday's train trip from Philadelphia to Washington, the images were stunning. Why? The sea of people who lined the tracks and watched the Saturday speeches-- and the millions who crowded the national mall to watch Obama become the country's 44th president.

People cared, and it makes you feel good about our democracy.
AT 12:01 AM