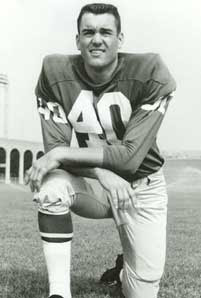 Tom Brookshier passed away Friday night after a battle with cancer.

His Philadelphia Eagles playing days were before my time, so I remember Brookshier most as part of CBS's number one NFL broadcasting team in the 1970's.

Brookshier was teamed with Pat Summerall.  They did three Super Bowls.  Summerall said listening to one of their games was like two guys in a saloon having a conversation.  He was right.  Summerall and Brookshier sounded like they were having fun.  Too much fun, some said.  There were reports of a little too much drinking.

For various reasons, CBS split up Summerall and Brookshier in 1981.  Summerall was teamed with John Madden, and it became one of the most successful pairings in broadcasting history.  A side note:  CBS tested a match of Vin Scully and John Madden, but Scully talked too much.  Summerall was a better fit.

Anyway, I remember when the split was announced.  It was a big deal at the time, and Sundays never quite sounded the same.  Pat and Tom WERE Sunday afternoon football and big games.  After a while, you adjust.

Brookshier continued to broadcast CBS games, with other partners, until 1987.  He did radio in Philadelphia after that.