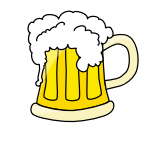 Bars can stay open until 4 AM in New York state.  Albany's mayor is asking for bars to close, voluntarily, at 2 AM.  The mayor reasons there will be less violent crime if there's less alcohol late at night, or early in the morning, depending on how you look at it.

Most bar owners quoted in a Times Union newspaper story say they need the money.  Their customers behave, and they'll stay open until 4 AM.  In other words, Mr. Mayor, take a hike.  I'd like to use another phrase here, but I'm a gentleman.

As you know, bars here in Pennsylvania have to close at 2 AM.  For a long, lone time, at least in Lackawanna County, 2 AM was a mere rough guide.  A lot of bars stayed open all night, under the radar.  Ernie Preate got elected district attorney and that practice came to an end.  Remember the furor his crackdown caused?

As a veteran of decades of working all nighters, let me tell you about the typical evening/morning.  The alcohol fueled bar fights usually start around midnight.  Then, when the bars close at 2 AM, there's a rash of DUI arrests and crashes.  When the drunks finally arrive home, around 3 AM, there's a spurt in the number of domestics.  I don't need a watch to tell what time it is.

As has been noted earlier in this space, I have no problem with the responsible consumption of alcohol.  The 2 AM closing time here in Pennsylvania seems reasonable.

If the state is looking for a quick infusion of cash, how about selling late night/early morning licenses for bars and restaurants-- much like beer distributors pay extra for a Sunday license.  Throw more money to the state, and you can stay open until 3 or 4 AM.  Police and the MADD people would likely oppose it, and I see the wisdom in their thinking.

Would an earlier last call time in Albany reduce crime, or will it just slide the timeline a bit, like we have here in Pennsylvania.  I don't think we'll ever know because the suggestion by Albany's mayor appears to be falling flat onto its face.

Let me throw something else into the mix.  There's a 24 hour fast food restaurant in South Scranton.  It was the scene of a triple stabbing early Sunday morning.  It seems there's always a fight or some other incident there.  The last time I checked, this restaurant doesn't serve alcohol-- just over priced, over salted food.  It shows you don't need alcohol to attract a bad element and cause problems.  Ask the people who work at the other 24 hour eateries in the area.  Hardly a night goes by where there's not a fight or someone skipping out on their bill, or some other assorted incident.

To sum up, the alcohol issue is more of a societal problem than one involving the clock.
AT 12:00 AM